The Cave ROVer Update: After months of hair pulling and many hours of coding, the Robotic Simulator is coming along. When the weather is to yuck to take the out the Cave Rovers, the advanced simulator allows test & training to continue. The system utilized the actual rover control system, displays, controller and robot, while advanced software basically sends a virtual world to the robots ‘brain’. So the ROV believes and behaves as in a real world environment. So in sort we send the robots mind into a video game and make it believe it is real

:). Extremely useful for pre-dive development as the rovers advance closer to visually learn and respond to their environment, survey/map and operate autonomously gathering data

One step closer to the possibility of not only the Cave Rover Project robots, that presently gather a wealth of data, to interact autonomously with its surroundings but even as a human diver companion, recording data and responding to both hand signals to even emergency surface alerts if the diver visually appeared to struggle as we look into possible future applications. Gloomy day outside, thinking big inside 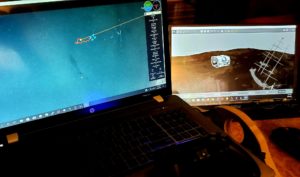