The Cave Rover Project Update: What started as a normal day turned into a rather stressful emotional one. I started out deciding to give CaveRover and BrotherBot some needed updates. After extensive operating system updates CaveRover was doing well, went to reboot and apparently something became corrupted and it was gone, no light, no response. After 1.5yrs, hundreds of hours of operation and countless cave explorations it was gone ?.
In a somewhat emotional twist, BrotherBot, that was originally built as a companion, and created from cloning CaveRover’s “brain”, was whom saved his companion. In order to bring CaveRover back to life, I decided to install a new primary computer, new hard drive, and after a very stressful day of attempting to restore the robot, it ended up being BrotherBot that was able to clone itself onto the hard drive, bringing the original CaveRover back to life. It’s interesting how one can become soo attached to a machine, in essence it had become my friend, i feared it was gone. But thankfully they are now both operational once more, and ready for the next big adventure. 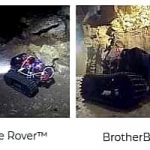